Take notice on your next flight in the United States: While your flight crew might be female based, chances are that your pilots are all male. Only five percent of pilots in the US are female, but Delta is trying to combat that statistic through its WING program, which just took its fifth annual all-female flight this past Saturday.

As part of the airline’s Women Inspiring Our Next Generation (WING) initiative, an all-female flight crew, including female gate agents, ramp agents and flight control, flew 120 female students aged 12 to 18 from Salt Lake City to Houston for a once-in-a-lifetime experience at NASA to meet with female leaders shaking up the male-dominated aviation and engineering industry. The teenagers also got to spend time with Jeanette Epps, NASA astronaut and aerospace engineer, to learn more about her groundbreaking work to help close the gender gap. 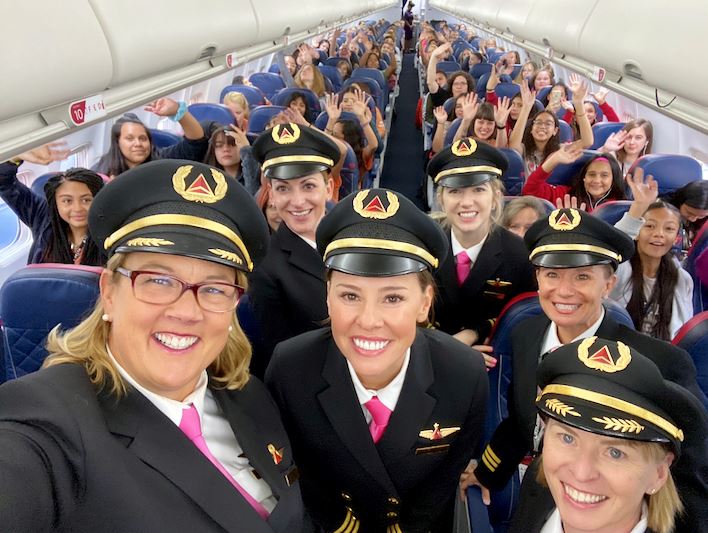 Since its inauguration in 2015, WINGS has flown over 600 female students as part of its work, introducing them to various STEM opportunities and consequently inspiring the next generation of female leaders.

“I am inspired by this next generation,” explained Captain Kimberly Gibson, who was part of WING’s most recent flight, to AOL Finance. “I think that there are more and more girls these days that understand that the world is an open door. I think this is one of the best things Delta can do to put themselves out there, to put our airline out there and to grow the next generation of pilots.”

Delta, which achieved 100 percent pay parity for its frontline employees and has been ranked as one of the “Best Workplaces for Women,” is also working with female middle school and high school students through a variety of initiatives with Propel, Solo Flight Academy and Aviation Career Education Academy.

“We know representation matters. At Delta, we believe you have to see it to be it,” said Beth Poole, General Manager Pilot Development, who helped start Delta’s WING Flight in 2015. “We’re taking ownership to improve gender diversity by exposing girls at a young age and providing a pipeline so that 10 years from now, they will be the pilots in the Delta cockpit inspiring generations of women who follow.”

“That is the most rewarding part,” she continued. “You see that glimmer in their eye and they know that there is some possibility that they could be doing this and it’s something they probably never thought of in many cases.”